Running Away from SAD(seasonal affective disorder)

Here is a nice piece from Runner’s World where I talk a little about how running (and really any exercise) can help improve neurotransmitter balance and boost mood. Exercise and mental health are relevant all the time but keep this article in mind come the end of summer.

I incorporate precisely this thinking into the Project b3 Program that we recently launched at Amare.

Read the original article at RW – or the pasted version below.

BY JAYME OTTO AND JORDAN SMITH 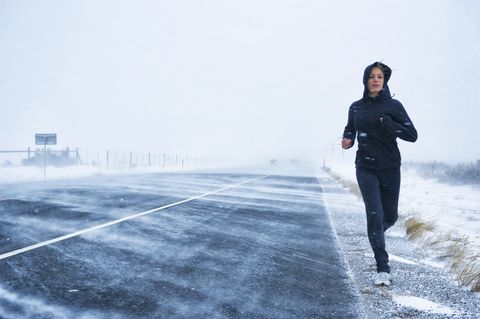 If the drab weather seems to be affecting your mood, you’re not alone. And, if you tend to feel those “winter blues” year after year, you may be experiencing seasonal affective disorder (SAD).

According to the Cleveland Clinic, SAD is “a depression that occurs each year at the same time, usually starting in fall, worsening in winter, and ending in spring. It is more than just the ‘winter blues’ or ‘cabin fever.’”

Even for normally cheerful runners, these feelings can be common when temperatures drop and you get less exposure to the sun. Although this gloomy state of mind is less severe than SAD, which is a clinical mood disorder, it can still throw you—and your running—into a funk, says John Martinez, M.D., a Woodland, California-based urgent care physician at Dignity Health Medical Foundation.

Fortunately, if you do get moving, research shows that you can outrun those seasonal blahs. While the first few miles may be tough, you are setting yourself to hit those runner highsbefore spring even arrives if you avoid hibernating and hit the roads (or treadmill). Here’s what you need to know to fight SAD for good.

Lace up for 30 Minutes

It’s simple logic: When you run, you feel good, and you keep at it. When you don’t run, it becomes more difficult to start back up again. The cause behind this phenomenon is simple brain chemistry, says Shawn Talbott, Ph.D., a nutritional biochemist who has completed more than 100 marathons and triathlons.

Exercising for about 30 minutes, three to five times a week, can help relieve depression symptoms, according to the Mayo Clinic. Good news for runners: more vigorous activities (running) may take less time to improve your mood. According to Harvard Health, starting an exercise routine you can maintain—even just getting moving for a few minutes a day—can help improve mood and relieve depression.

Vitamin D, a fat-soluble vitamin that your skin produces when exposed to sunlight, is more than just a vitamin. It acts like a hormone, which means it affects every tissue in the body, Martinez says.

Plus, research shows that higher levels of vitamin D may lead to lower depressive symptoms. Vitamin D deficiency may cause run-thwarting depression and fatigue, as well as diabetes, heart disease, stroke, and osteoporosis.

“You’ll produce up to 20,000 International Units (IU) of vitamin D by being in the sun between the hours of 10 a.m. and 2 p.m. in the summer,” Martinez says. But in the winter, leaving for work and returning home in the dark means less of this vital vitamin.

Recommended amounts of skin exposure to the sun vary by factors such as skin type, where you live, and season, according to the Vitamin D Council. If you can, get outside during your lunch break—even for just a 10- to 15-minute walk. But in places like Boston, Salt Lake City, or Seattle, exposure to solar ultraviolet rays isn’t strong enough in winter to fuel vitamin D production in skin. In this case, popping a vitamin D supplement in winter can help you avoid deficiencies since you aren’t getting enough naturally.

And diet won’t fill the gap, either, Martinez says. You’ll only get about 120 IU from a glass of fortified milk and an average of around 500 IU from a 3.5 oz serving of salmon, depending on preparation. (For reference: The National Institutes of Health’s recommended dietary allowance of vitamin D is 600 IU of vitamin D daily for adults under 70 and 800 IUs for those over 70.) If you’re feeling depression and fatigue, check with your doctor about adding or increasing your vitamin D supplement.

When we’re stressed from missing runs, our cortisol levels increase. Elevated levels of this hormone cause a domino effect in the body, reducing testosterone and interfering with brain neurotransmitter function, resulting in decreased motivation, fatigue, anxiety, and depression.

Luckily, running acts as a natural de-stressor, clearing excess cortisol, bringing testosterone levels back to normal, and rebalancing norepinephrine (a stress hormone), dopamine, and serotonin (feel-good hormones) in the brain.

Check in With Yourself

Do you usually prefer group runs and find yourself making excuses to ditch your training crew or run solo? It may be a result of SAD, especially if you’re experiencing other symptoms of it.

Light therapy, cognitive-behavioral therapy, or prescribed antidepressants are common treatments if you see a doctor, according to the Cleveland Clinic. (However, if solo miles are always your thing, keep pounding away to keep the winter blues at bay.)

Winter running brings more contingencies to deal with. In order to avoid missing workouts, Sharon Chirban, Ph.D., a Boston-based sports psychologist, recommends having a plan B. You’re usually a morning runner, but the predawn thermometer is stuck at zero—be willing to run in the afternoon instead. If the street is an ice rink, head to the gym and hit the treadmill.

Own Your Morning Run

“The key to maintaining a winter routine is mental flexibility,” she says. “It’s essential to have the ability to reframe your workout in order to avoid ditching it.”

The more ways you can keep yourself from quitting or giving in, the easier it will be to stick with a plan.

“Letting ourselves back off in winter can be restoring.” There is a value in slowing down, as well as in recovery. Substitute a yoga class for one of your weekly runs. Or, cut back your outdoor mileage and add in strength training. There’s also a benefit to embracing what makes winter unique. Immerse yourself in the season—gearing up for a run in the cold, taking on a man-versus-nature mentality can be exciting and rejuvenating, Chirban says.

Try switching things up. “When you hike or snowshoe a snow-covered trail that you usually run, it brings about a fresh perspective,” she says. “If you can find a way to work with winter, not against it, in your training, you’re setting yourself up for a powerful start to the spring running season.”

balance biome body brain fiber gut brain connection prebiotics probiotics stress theanine
I use cookies to ensure that I give you the best experience on my website. If you continue to use this site I will assume that you are happy with it.AcceptLearn More